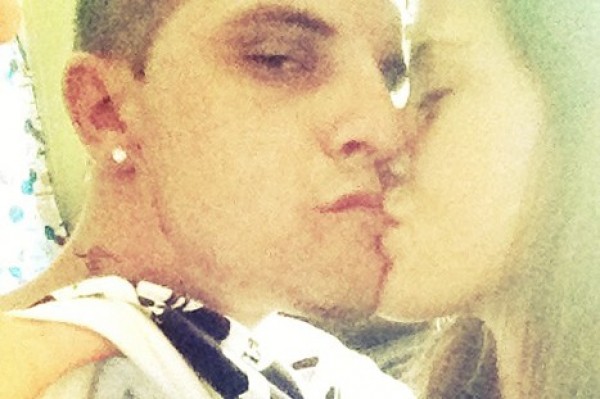 Jenelle Evans, who just last week confirmed her pregnancy, was arrested today for public nuisance when police were called to her home after a fight broke out between the Teen Mom and her boyfriend. Jenelle and Nathan Griffin were believed to be having a heated argument before she threw him out of the home, locking him out in the process.

A neighbor tells In Touch, “Jenelle must have gotten into a fight with her boyfriend, and locked him out of the house. He was banging on the door, and someone must’ve called the cops.

“They showed up soon after and Jenelle was originally hesitant to let them in. When she finally opened up, they went inside and next thing you know she was being brought out in handcuffs.”

Patrick Dowling, Public Information Officer for North Myrtle Beach tells In Touch, “She was arrested at about 6pm tonight on a charge of Breach of Peace and has been released on bond. I will not have details until Monday when I can get an incident report.”

This is one of several arrests for the troubled Teen Mom 2 star. In April of this year, Jenelle was arrested for heroin possession and domestic assault. Then in August, she was arrested for failing a drug test that was part of her plea deal for the heroin charge.

The 21-year-old admitted she was pregnant with her second child last week after In Touch first reported it. She currently does not have custody of her four-year-old son Jace but a source told In Touch she is hoping this second baby will help her regain custody. Let’s hope she can stay on the straight and narrow now that she is having a child with Nathan!

jailJanelle EvansPregnant
<< Previous Post << Toward The Past: Miley Cyrus Snubs Lindsay Lohan (Mean Girls)
>> Next Post >> Toward The Future: The Gossip Table Heats Up To 98 Degrees With Half-Naked Men