Miley Cyrus too racy for Suri Cruise and Kelly Ripa? 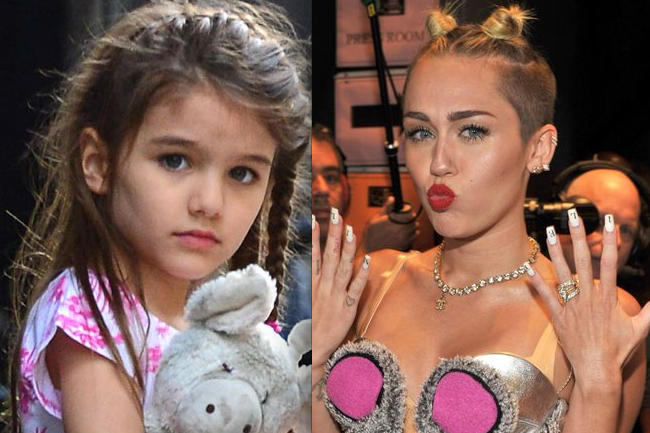 Miley Cyrus shocking performance at Z100 Jingle Ball 2013 Friday night was too racy for some parents, including Katie Holmes who attended the event WITHOUT her daughter Suri.

Miley Cyrus dressed as a sexy Santa with a bare midriff and a bikini bottom, and she danced with a transsexual holiday tree and a female ‘little person’ wearing silver cone breast.

“Kelly Ripa left long before Miley appeared, and Katie Holmes, who was a strange choice introduced the first act, did not bring Suri and left long before Miley appeared,” reveals one insider to THE GOSSIP TABLE. “Katie is a lady, she likes to have fun like everyone, but doesn’t need her daughter hanging around backstage with Miley and Lindsay Lohan.”

We were at the show and witness several nervous parents watch Miley perform, although it must be said – the kids (and the naughty but nice rob team) LOVED her!

“Kelly had a great night,” reveals on pal. “She just was exhausted and needed to go to bed, she would have loved to see Miley perform but couldn’t wait until after 11:00pm,” reveals a friend.

kelly ripaMiley CyrusracySURI CRUISE
<< Previous Post << Toward The Past: Simon Baker: The Mentalist Half Naked (you are welcome)
>> Next Post >> Toward The Future: Kendall Jenner the new Yoko Ono (Kris Jenner wanting solo Harry Styles?)