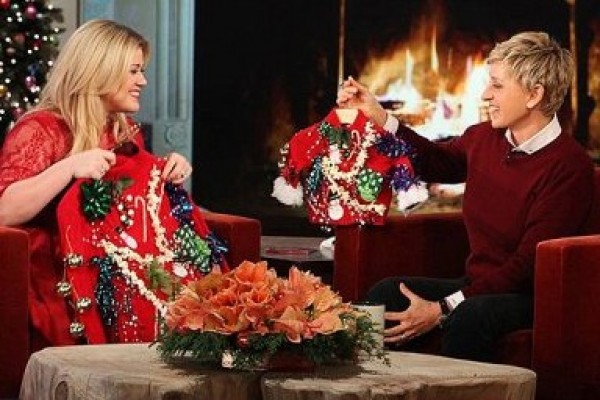 Kelly Clarkson is having a rough first trimester, telling Ellen Degeneres that she vomits “a good dozen times a day.”

“I vomit a good dozen times a day its like bad. I vomited before coming out here,” Clarkson said. “I’m not even kidding, it’s so bad. It’s so bad. It’s, like, so gross. And that’s the thing too, you’re not attractive when you’re pregnant. Everybody tells you [that] you glow and your hair is pretty and your nails are pretty. That is total crap. My nails are short, my hair still falls out — it’s not all lush and beautiful — and I have no glow. Unless it’s, like, something left over from a bad throw up. It’s horrible.”

…”It’s miserable,” Clarkson added. “But I’m so happy I’m pregnant. I just wish he or she would stop trying to kill me.” The first-time mom-to-be doesn’t know the gender of her baby yet, but said it doesn’t matter “because the name we picked is if it’s a boy or a girl it’s the same name.”

dayKELLY CLARKSONTimesTwelveVomits
<< Previous Post << Toward The Past: Harry Styles Parties In NYC With New Love Interest!
>> Next Post >> Toward The Future: Carrie Underwood Fights Back at “Mean” Critics: You Need Jesus