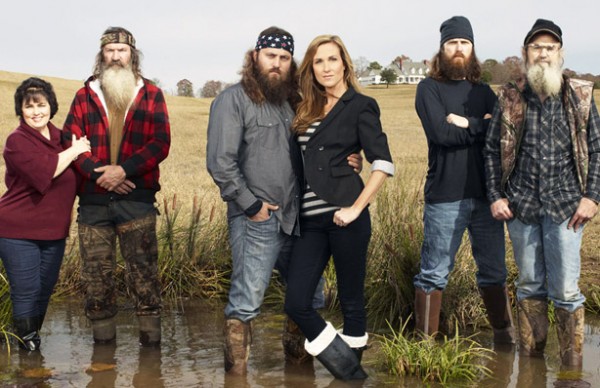 The 23-year marriage between high school sweethearts Missy and Jase Robertson of Duck Dynasty has hit a few rough patches over the years that haven’t been discussed on their hit A&E reality show.

“It wasn’t love at first sight with Jase,” Missy reveals to our pals at In Touch. “It took me a while to get to know him before I knew I wanted to marry him.” She also is not a fan of Jase’s famous beard. “I’d much rather have the face that I fell in love with,” she admits to the mag. “He says, ‘When the show is over, I’m shaving!’”

The couple was seriously tested when they welcomed their youngest child, Mia. “She was born with a cleft lip and it was heartbreaking. It was especially tough on Jase to see his little girl with a disability, so we had to alternate who was the ‘rock’ during that time.”

Now 10, Mia is the picture of confidence, says her proud mom: “She just bursts into a room and starts talking — she’s even done public speaking in front of thousands of people!”

duck dynastyrevealedsecrets
<< Previous Post << Toward The Past: Harry Styles Parties In NYC With Another Girl Before Kendall Jenner Arrived!
>> Next Post >> Toward The Future: Did A Roving Eye Cause Taye Diggs’ Split From Idina Menzel?